Island Hopping is a game I developed when I taught middle school back in the day (2007). It was a response/solution to “what to do with 150 kids during indoor recess?” and having access to a gym.

It’s a game of economics, strategy, and speed. Oftentimes, the team that figures out the speed aspect, along with purchasing a second boat quickly wins.

I had the game designed in an old file (.pages), and I can’t seem to find it, and now have a paper copy only, so, I am recreating it here. I suspect a broken hard drive holds the secret, but the original design was before Dropbox/Google Drive…

So, here you go…. with some additional modifications, enhancements along the way.

There are at least two (2) teams playing. Each team consists of at least 15 people, although the rules can be altered to accomodate other combinations.

The more even (in numbers) the teams are, the better.

Island Hopping is specifically an inclusive game – everyone is welcome!

Island Hopping can be played on any kind of field, inside or outside.

An area the size of a regular basketball court is ideal, but larger or smaller areas will work as well. Each team needs an opposite side to play towards – but the field can be of any shape.

The equipment for Island Hopping is simple, and can easily be adjusted based on the amount of players, the environment, and the materials available.

For a game consisting of two (2) teams of 15 players, the following is ideal as it makes for a fast-paced even gameplay:

Updated – I used loops of webbing that I sewed together – they seemed to last a lot better as there tend to be a lot of hard use during the game, and we broke a hula-hoop or two… A loop of rope would work, too.

The object of Island Hopping is to transport all players to the opposite shoreline, via the island.

At the beginning of each game, each team is located along their own shoreline, and each team has one (1) boat with a designated captain (a player of choice).

When the game begins, each boat transports no more than two (2) players to the island where they disembark. The boat returns to pickup two more passengers, and so on.

Here’s how travel is defined and limited:

When all players on a team have been transported to the opposite shoreline, that team has won the game.

Updated – A series of games is recommended, as one game will be very fast (<5 min). Best of 3, or a series perhaps…

During play, all players must remain within the designated boundary lines, as set forth by the organizing entity or game official.

For example – no shoreline creep… with players meeting the boat out in the water. See more below.

The game is very quick, and full of high energy – especially when played with middle schoolers.

Each round will likely take less than 5 minutes, and therefore, a series is recommended – best of 3, or a tournament style “International Island Hopping Championships” perhaps…

I wrote this to better help guide our young players in grades 6-8, but a good guide nonetheless for any player of any organized game.

Here’s the general layout, based on a basketball court. Remember – if you have more players, move outside to a soccer field or football field. Smaller? Play it in a classroom… 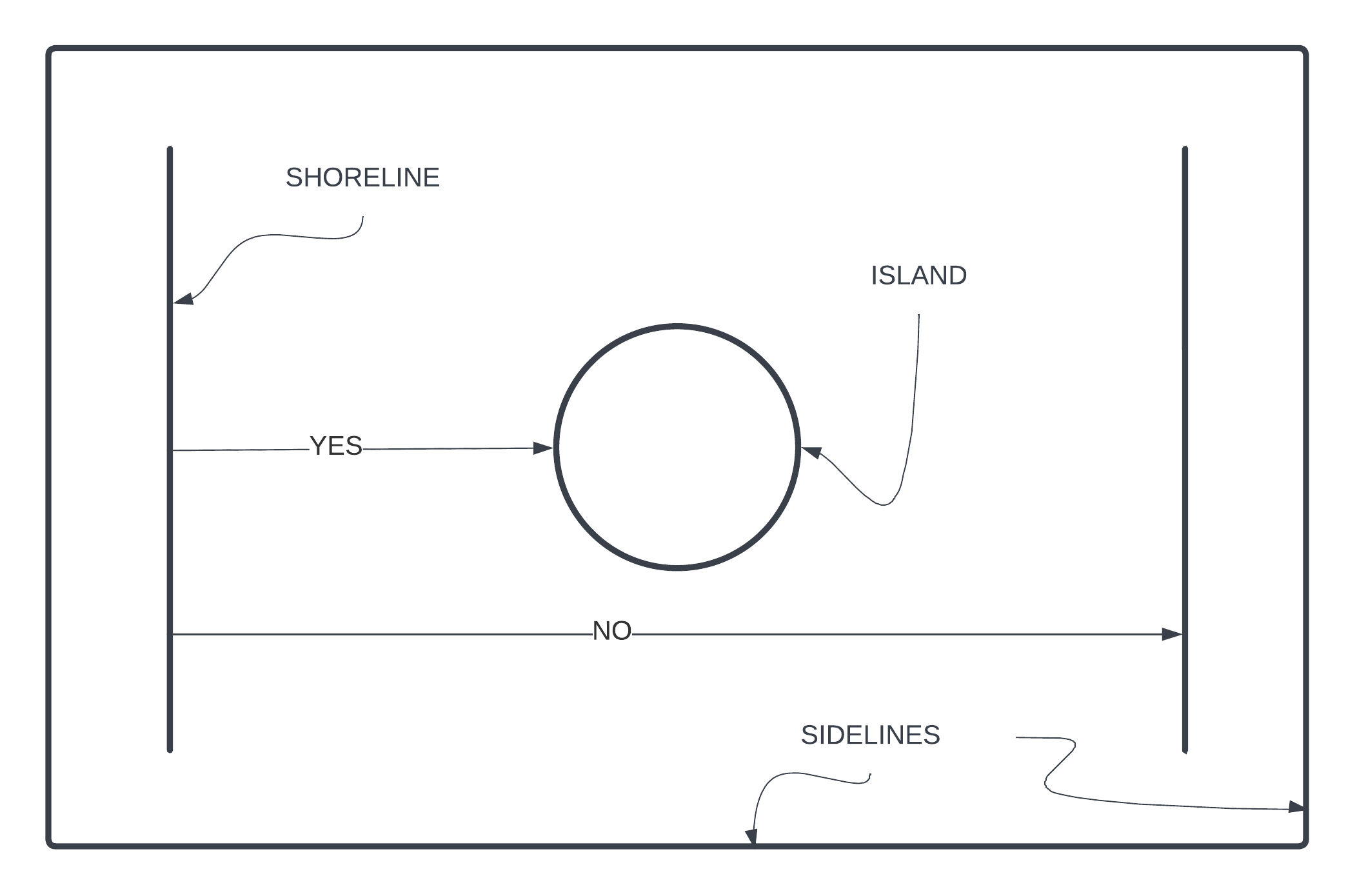 Use what you have to mark the field – cones, flag markers, or other play equipment make easy material.

It’s been a while since I played, and led game play with a hundred kids at a time… but here are some reflections/questions for you.

Now it’s your turn. Get a large group together, and start sending those boats… Use this game however you feel like it.